Earlier this year, iGround presented a series of blogs to address the methods of approaching the various levels of Power Quality site surveys, depending on the location to be investigated.

In Part 3 of this series, we addressed the issues related to investigating the AC Grounding Electrode (Earthing) System. In that installment, one of the things we DIDN’T address was the environmental aspect of being outside while digging up/testing the electrode system; namely the weather (extreme hot/cold), fire ants, spiders, snakes, alligators, tarantulas, more snakes, rats, and other nightmarishly dangerous things (did I happen to mention snakes?).

The danger INSIDE of a building is even less forgiving…electric shock. So, I want to make sure the reader understands that any metering investigation of a panelboard, regardless of its location, requires the participatory efforts of a trained professional (namely, an electrician) with the appropriate Personal Protective Equipment (PPE). Make sure you have updated and approved PPE if you are going to assist in any manner, including supervisory.

(Review OSHA 3151-12R or National Fire Protection Association’s NFPA 70E, Standard for Electrical Safety in the Workplace. Furthermore, your locale may have other requirements in place.)

A Level 1 survey for an AC sub-panel will be broken into three subcategories; Visual, Mechanical, and Electrical (metering).
Recommended Tools and Equipment to have:

Panelboards are available in many shapes and sizes so how we review the internal wiring may change our perspective, as well. Here are some of the things that I look for:

(See Figure 1 for example of improper N/G bond in panelboard.) 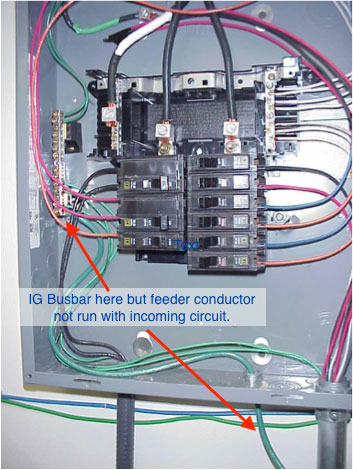 I would also make sure to point out any white wires on the ground bus or green wires on the neutral bus. Having either of these conditions creates a N/G ‘reversal’ for the affected branch circuits and, thus, can be just as dangerous.

Visual cues that may seem like minor housekeeping things: discolored terminations or conduit bushings (evidence of overheating), proper conductor identification (particularly of the feeder conductors), or more than one hot conductor on a breaker are worth noting.

I cannot overstate the importance of tightening up connections at the main, the circuit breakers, and/or the busbars. It’s tedious, but your equipment will thank you for it.

The attached checklist should be self-explanatory in regards to ‘what’ we want to test for…but it’s going to hinge on experience and intuition, and some further knowledge of the power system, as to how we determine IF there are problems. Some rules to consider:

<<Figure 2 with caption ‘Isolated Grounding (IG) busbar is referenced by a conductor run outside the panelboard frame. This is a safety and lightning damage concern…and often overlooked.’

If I’m working alongside the customer’s electrician, I am always going to have a power line monitor that I can connect to an electrical panelboard that supplies power to sensitive equipment areas. Each power line monitor is different so the best advice I can give you is: 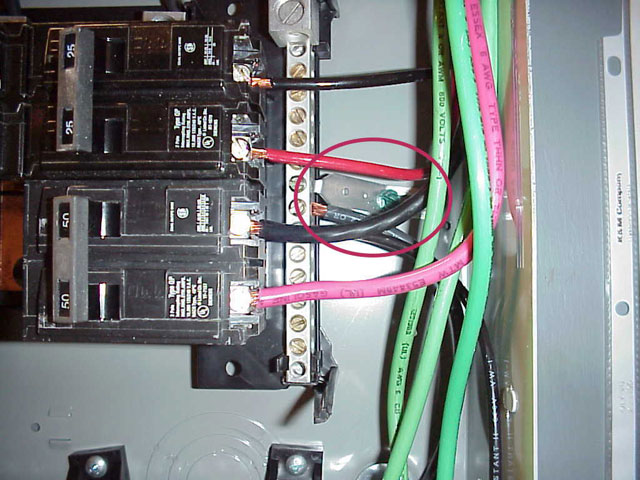 The only marginally acceptable Level 3 testing that I can see doing at a panelboard is EMI measurements to make sure there is less than 1mG (milligauss) per meter…….and that is ONLY IF the panelboard in question is within six (6) feet of any sensitive electronic equipment device. Otherwise, Level 3 could be a waste of time here.

Infrared thermography, though popular, is a superficial (albeit safe) method of trying to find looses connections. However, since an IR meter will not detect loose ground connections (due to lack of current across the terminations), you have to open the panelboard, anyway. My suggestion is…dump the IR meter and get an electrician with a good set of wrenches, screwdrivers and appropriate PPE. Work with them to make useful measurements and you’ll get to the problem quicker.

As with other areas of this blog, retrieve a sample checklist, above, in the section for Recommended Tools and Equipment. It will cover all the things you may expect to encounter at a panelboard (some we’ve discussed here), but feel free to personalize it for your own needs. 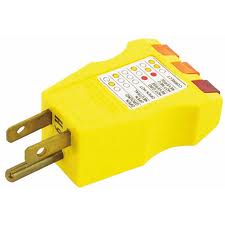 A friend of mine was fond of saying ‘the bitter taste of poor quality lingers long after the sweet aroma of low price is forgotten.’ I think a strong case could be made for that saying to apply to the widespread use of three-lamp circuit testers that are commercially available at any hardware store. But after 30 years of being in the business of Power Quality troubleshooting, I find it perplexing that the widely-known problems with these testers is still a well-kept secret when it comes to electricians, engineers, electrical inspectors, home inspectors, and just about anyone else who troubleshoots electrical systems.

Sure, we’ll spend thousands of dollars on high-end troubleshooting devices such as harmonic analyzers, power line monitors, oscilloscopes, spectrum analyzers, and many more in an effort to locate electrical problems. Armed with the knowledge that these only find a small percentage of power quality-related problems (less than 10%), it begs the question as to what is being used to test the quality of the electrical wiring. Most students in our classes tell us that they use the old standby…the three-lamp circuit tester.

‘Why?’, we ask. The response is almost universal…’they’re cheap’.

Yes, the three-lamp circuit tester is inexpensive. And, so I’m on the record here, I don’t want to misrepresent the validity of their product listing for safe use. They are indeed compliant with regulations on manufactured test equipment. But a product listing does not guarantee its indicated results.

And the simple truth is: these devices can be very inaccurate and give a CORRECT indication when, in fact the outlet has one or more problems…or give INCORRECT wiring indication when everything’s fine. On more than one occasion, some of those we speak to who have attempted to correct the wiring errors indicated by the circuit tester have admit to spending money on ‘problems’ that weren’t there or not correcting the problems at all.

When one considers that the vast majority of problems are caused, or worsened, by the polarity AND integrity of the wiring and grounding connections, it’s not a stretch to think of the money it can cost you in the long run, not to mention the underlying threat that shock or fire hazards go unnoticed!

So, why are these three-lamp circuit testers ineffective?

Let’s start with the basic construction of them. If you take one apart, you’ll find that they are nothing more than three lights connected to the three blades of the device via resistors. These are commonly called ballast resistors, and they prevent each light from burning out when connected across 120VAC. That’s basically it! This is why it’s inexpensive…very few parts. But the simplicity is its downfall.

A capacitor is, by definition, two conductors separated by a dielectric (or insulator). We use them for filtering wanted/unwanted frequencies as well as for storing charges (or a voltage) between two points in an electrical circuit.

In electrical wiring, we can take this a step further and presume a capacitor can exist where two wires are separated by the insulation around one or more wires (or even the air!). This can be observed in the figure below.

We have two circuit conductors for a 120VAC circuit – a hot and a neutral – and are using an equipment grounding conductor. As the length of the 120VAC circuit increases, the circuit conductor (hot) has distributed capacitance between it and the metallic conduit. The effects of the capacitance are diminished if all conductors are properly terminated and tightened. But, let’s assume the equipment grounding conductor pigtail from the metallic box to the receptacle becomes ‘open’. We can assume a capacitive voltage will now exist between either the hot or neutral conductors (or both) and equipment ground terminal at the receptacle.

This capacitive voltage causes the tester’s lamp (which is connected across these conductors) to light when they shouldn’t, thus giving an erroneous CORRECT WIRING indication. This open ground condition represents a serious safety hazard during fault conditions, while also being detrimental to the operation of electronic equipment. Yet, the three-lamp circuit tester indicates this circuit is GOOD.

The bad news doesn’t stop there…

This sounds like a bad thing (and it can be) but it’s just another way of saying ‘capacitively-coupled current’. I tell people to imagine their equipment frame as a conductor, their internal electrical components as conductors (which they are), and the air between them as an insulator. If, over time, the barrier of the air ‘breaks down’ due to the build-up of dust, dirt, moisture, or insulation breakdown on wires between the frame and components, then some current will ‘leak’ on over to the equipment frame. At low levels, this current is harmless…but it’s there. Leakage current flows through our bodies all the time on some devices and we hardly feel it. Above certain levels, it can be harmful (that’s why we have Ground Fault Circuit Interrupters (GFCI’s)).  But we won’t address that now…

Suppose you connect a device that causes leakage current to an outlet (or a set of outlets) that are affected by a loose or open ground condition. You might think that there’s no path for leakage current to flow. But, once the three-lamp tester is plugged in at any outlet on the same string of outlets, guess what? The resistor between the ground blade and the light will provide a load to the circuit and falsely indicate a GOOD condition. Or, worse yet, it may cause one of the other lights to darken or illuminate when they shouldn’t, thus indicating a DIFFERENT condition.

This could lead you to ‘correcting’ a wiring condition that doesn’t exist or give you a false sense of security. In either case, it sows a seed of uncertainty that we don’t need in complex electrical systems, especially if we’re trying to troubleshoot wiring and grounding problems.

Your ability to successfully troubleshoot ac wiring and grounding problems (or even power quality problems) will hinge on two things: your methods (a later blog) and your tools. One of the most important tools in the bag will be a wiring polarity/impedance tester that can successfully indicate the wiring conditions at each outlet in a working electrical environment. This includes polarity AND integrity of the wiring.

I know what you’re thinking…‘iGround makes an impedance tester…it makes sense to bash the competition.’ Well, iGround isn’t the only company to make an impedance tester. Furthermore, NO tester is ‘perfect’ and finding some wiring conditions in an energized electrical environment requires a certain level of troubleshooting skills not taught these days, regardless of your tools. But, when the Institute of Electrical and Electronics Engineers (IEEE) Standard 1100 (Emerald Book) singles the three-lamp testers out specifically as what NOT to use for troubleshooting purposes, you know there’s something to it.

So, if you have a three-lamp circuit tester, don’t throw it out…keep it as a night-light…otherwise, you’ll be stumbling around ‘in the dark’, in more ways than one.