In our previous blog, we outlined the perceived need for an IG system and the issues surrounding electrical ‘noise’, or common-mode voltage. In part 2 of this discussion, the realistic issues that come about AFTER it’s installed are addressed.

Recently, a customer informed me they used IG outlets in their Tier 4 data center was because ‘our electrical designer said it was a Code requirement for electronic equipment’. He was surprised when I told him this is 100% FALSE! The NEC has wiring requirements (Section 250.146(d)) should you choose to install it but it falls far short of an ‘endorsement’.

Additionally, if you have an electrical system already installed, do not specify IG ‘after the fact.’ Doing so may, literally, cause more harm than good (see our previous blog on Isolated Grounding on more of the safety factor). From an electrician’s standpoint, an IG system cannot be installed safely per the Code due to the unsafe environment for ‘fishing’ wires back through energized feeder conduits. Most electricians understand this and may result in your site getting orange IG outlets…but without IG wiring. But, on occasion, it can be found where ground rods driven in to an electrical room floor reference IG busbars in subpanels. This is easy for me to say ‘it’s a Code violation’ (which it is) but for those on site who lack the education on what to look for, it can be a safety and lightning damage issue waiting to happen.

To further the point, I’ve done upwards of 2,500 power and grounding site surveys in my 30-year career…with about a quarter of those related to IG wiring in one fashion or another. And in that 30-year career, I’ve only seen it installed correctly about a dozen times…that’s it. And, for those dozen customers, I was there because of problems IN that IG system.

So, the Code requirements aside, IG can have the following effects on your site:

Once one learns a little about basic electrical wiring, it is no wonder to them that the majority of sites that use IG systems fall into numbers (3) and (4).

You see, most people open up their outlets at their home or business and all they see are wires. To give further credit, we will assume that all who see the wires understand they have resistance (See Figure 1). But that model only works in a ‘DC world’.

AC wiring is more complicated. A single conductor model can be seen in Figure 2, which shows the resistance AND inductance along it’s single path.

Now, let’s add in the neutral and equipment grounding conductor…and what do we have? Resistance, inductance, and capacitance between the wires (See Figure 3).

Long story short…you’ve got yourself a low-pass and high-pass filtering network. And though it’s quite capable of carrying any 60Hz currents, it’s equally adept at working against you by rejecting disturbances in the higher frequency spectrum, particularly those associated with radio frequency interference, lightning, some harmonics, and electrostatic discharge.

Here’s Where It Can Get Ugly

The saving grace for a solidly grounded system (SG, or non-IG) is the fact that all conduits, panels, junction boxes, etc., are mechanical, permanent, and continuous. But an IG system? It’s a single-conductor wiring system grounded at one end (that’s the definition of an antenna, folks) so now it becomes a receiver for unwanted signals.

So, even if installed per Code, it makes the site more susceptible to common-mode events because it can’t really equalize high-frequency currents and voltages unless it can get back to the main panel. And, if that main panel or transformer is many feet away (more than 10 meters), your chances are practically nil on being able to mitigate high frequency (HF) noise. This is due to an electrical phenomenon called parallel resonance (which is a subject for another blog article, I suppose) where any signal on the metallic conduit or an ‘intended path’ (like an IG conductor) now must find another way to travel.

In a nutshell, two negative outcomes are likely. One, it can couple on over to other hot and neutral conductors within your electrical wiring and affect (or ‘infect’, if you will) many other devices in your room. Or, in a worse case scenario, the common-mode currents will reflect back to the equipment. Yikes.

What Can We Do? 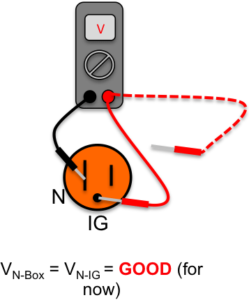 The blanket recommendation of an IG system may do more harm than good. We’re finding that more voice/data sites are not provided an IG system and, yet, the equipment performs remarkably well. Whether an IG system is utilized or not, always make the aforementioned voltage measurements, check the outlet wiring, and measure the existing system’s hot, neutral, and ground impedance (max 1 ohm per IEEE) appropriately prior to making any changes. This will help pinpoint existing wiring deficiencies that may be corrected with a couple of turns of a screwdriver or a means other than an unpredictable wiring system. But, if everything’s within acceptable limits and the equipment is working fine, the existing equipment grounding system configuration may be best left alone.